This week we take a close look at the Lisk Passive Income feature, more commonly known as ‘staking’. Lisk is the German-based blockchain protocol that pays you in a cryptocurrency called LSK. To earn the Lisk passive income, you simply hold the LSK tokens in a digital wallet. We’ll show you exactly how. But first, a much-needed quote about earning passive income.

“A wealthy person is simply someone who has learned how to make money when they’re not working”.

Robert is now worth $80 million and continues to make $2 million per month from all his ventures and investments. Our Earn Passive Income with Crypto series covers multiple ways for people to create passive income opportunities with cryptocurrencies.

A unique blockchain ecosystem for decentralised applications, Lisk has been in development since May of 2016. Lisk uses Javascript as its programming language, with each DApp having its own ‘side chain’ linked to the main Blockchain, allowing scalability and flexibility. Much like Ethereum, this will allow DApps to have their own cryptocurrencies, analogous to ERC20 tokens. 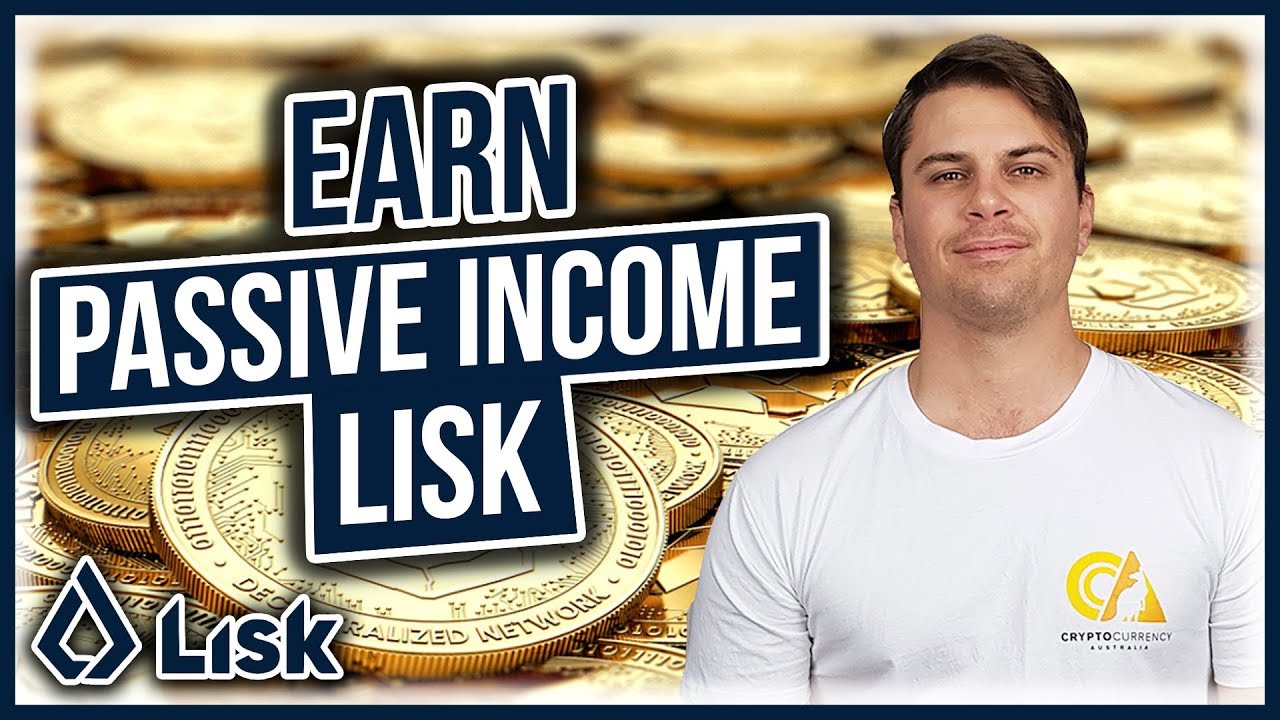 Before learning how the Lisk Passive Income feature works, feel free to check out our Lisk SWOT review.  Reading our analysis is a great way to familiarize yourself with the Lisk project.

Lisk operates on a public blockchain, much like Bitcoin, Ethereum, Litecoin, and others, with block explorers allowing anyone to view transactions and other information occurring on the network.

By using the Javascript programming language for building and interacting with the Lisk ecosystem, Lisk is targeting the millions of experienced web developers who have Javascript experience. This is intended to help both the Lisk blockchain grow rapidly and to lower the barrier to entry to developers wishing to experiment with decentralised technologies.

How does Lisk differ from other blockchain protocols?

Unlike many existing blockchain architectures, which have scaling issues, Lisk has developed sidechains. These allow developers to fully customise their own blockchain, create their own unique cryptocurrencies, and run an ICO.

As mentioned earlier, Lisk is programmable in Javascript, a widely used programming language known to millions of developers worldwide. The Lisk Hub will be an all-in-one solution that acts as a wallet, and in the future will feature a decentralised exchange, registration of a sidechain, and the ability to launch an ICO.

Lisk has also been in development for over two years. During that time they’ve paid a lot of attention to branding, marketing, and education.

Because companies can run an ICO on Lisk, tokens can also be used to participate in an ICO, just like Ether and applications built on the Ethereum blockchain. Over time, demand will increase for the token as it is used more for ICO contributions, and as companies hold reserves of LSK to fund operations.

The token is also used as a monetary incentive for helping to secure the network. It’s used to vote for delegates who help secure the network, and for staking in a digital wallet. This provides incentives for investors and stakers to hold the token, as passive rewards can be generated in the Lisk Passive Income staking system.

Lisk has designed in blockchain security using something called DPoS, which stands for Delegated Proof of Stake. This allows people to act as delegates or nodes, and for holders of the LSK token to vote for delegates and to earn passive LSK. This is the mechanics behind Lisk passive income and all other staking cryptocurrencies.

Lisk has designed the creation of new LSK tokens to slow down over time, with the token emission schedule following a linear block reward reduction. In summary, it looks like this:

As network demand increases, the amount of LSK coming into circulation will decrease. To see this more clearly, you can view the Lisk countdown timer at any time.

LSK on the Crypto Market

The LSK token is traded on exchanges, meaning its price is subject to supply, demand, and speculation. While it fluctuates accordingly, the price of LSK could go up or down in a very volatile manner.

Much like all other staking cryptocurrencies, the amount you can earn through staking is proportional to the quantity of LSK tokens you hold, and not the USD value of that holding. This means that if you purchase LSK now at its current market rate, it would be 87.56% cheaper to earn a set dividend now than if you had bought in last January.

How Much Lisk Passive Income Can You Actually Earn?

So how much can you earn by staking Lisk? This all depends on the quantity of LSK tokens you hold. We can calculate our monthly earnings using websites like earnlisk.com, where you can input an amount of Lisk and it will calculate an approximate amount of monthly earnings.

For a balance of 1000 LSK, the earnings will be approximately 9 LSK per month, or 108 per year. That’s around a 12.3% return in LSK tokens, assuming the dividends are kept in the wallet and allowed to compound during the year. The return from your initial purchase in fiat (USD or AUD), would depend on whether the token appreciated or depreciated during the year.

As an example, if Lisk appreciates by 5% per month for 12 months after you buy your 1000 tokens and stake them, you would earn a 60% return for that year for your initial investment, excluding dividends. But here is the thing:  because dividends are paid automatically throughout the month, you could be making returns on the dividend tokens from the time they deposited into your wallet, AND your initial staked tokens. The effects of compounding can be truly remarkable here.

This is the power of cryptocurrency staking and compounding over time. Of course, this assumes there is any appreciation at all, and not depreciation, which is entirely possible.

Now that we’ve explained the background of Lisk, how do you go about earning some Lisk passive income? Well, there are two ways. One is as an active delegate running a node. The other more feasible way is to stake the tokens in a Lisk wallet, which is far simpler and easy to set up.

To achieve any of these options, some LSK tokens must first be bought on an exchange. This might be Binance, or CoinSpot here in Australia. More information on exchanges can be found here in our tutorial:

If you are technically savvy, experienced with software development, and have a lot of patience, you could launch your own delegate node. It will cost you 25 LSK (as of today about $87) to get started. As a mechanism for earning Lisk passive income this way, things can get a little complicated.

The issue with running a node is that there are only 101 active delegates (nodes) at any one time, and there are 1613 on standby. You also need people to vote for you to climb the rankings, and the current top rankings have a server uptime of between 98 to 99%. It is therefore relatively unfeasible for the general crypto investor to set up and run a node, so we won’t go into too much detail here.

If you’d like to learn more, check out this guide to setting up a node.

The more easier and friendly way for most people to earn Lisk passive income is through wallet staking.

To become a staker and earn dividend tokens, a minimum of 4 LSK is required to cast votes for delegates. You will need to purchase X + 4 at the minimum. That is the very first step.

You then need to download Lisk Hub, which is the new wallet and core client used for staking tokens and voting for delegates. You can download the wallet here.

Run the installer and open the application once finished. If you don’t have an existing Lisk ID, you’ll have to create a new one. It’s a simple process, but make sure to store your passphrase in a very safe and secure location. If you lose this or someone gains access to it, you could lose all your funds.

You’ll then need to send your LSK tokens from the exchange you bought them on to the Lisk Hub wallet. To do this, use the unique wallet ID address generated for your new Lisk ID. While you’re waiting for the tokens to arrive in your wallet, go to the Lisk Hub settings. On the right side, under Advanced Features, click the slider button to enable Delegate Features. You will now see a new menu item on the left that says Delegates. Click this. Here is where you will see the delegates.

These refer to the nodes we mentioned earlier. They all compete for votes based on their productivity and rewards. You will need to vote for 101 delegates, which is the maximum allowed. Each ‘vote’ lets you cast a selection of 33 votes maximum. Because we need to vote for 101, we need to vote 4 times. Each vote cost 1 LSK, which is why you need 4 LSK. Lisk has made earning Lisk passive income simple, but it does require a small upfront investment. This helps to separate spammers and encourages more serious investors to take part in earning.

To work out who to vote for next, visit earnlisk.com. These guys have made it very easy for us to cast our votes and have taken out all of the hard work. Scrolling down the page you will see 4 lists of ‘Batches’. These batches are put together based on the biggest sharing rewards. They optimally give you the highest dividend payout.

To begin the voting process, start by clicking the green Vote 1 box. Lisk Hub should automatically open and populate with the first 33 votes. Click ok, and follow through the steps to give 1 LSK for the vote. Simply follow the same process for Vote boxes 2-4, and that’s it. You are done voting and any tokens in your wallet will now be staking and earning you rewards.

Here are a few important considerations for staking and earning Lisk passive income that you should know about before getting started.

The frequency of rewards depends on the delegate payouts. Because sending Lisk costs 0.1 LSK, delegates will only send out rewards once your contribution reaches around 1 LSK. If you are only staking a small amount, this could take weeks. If you a staking a large amount, this could be just a couple of days. You do not need to have your wallet open to a stake. In fact, once you’ve cast your votes, you technically do not even need to have the wallet installed on the computer anymore.

Delegates’ performance and rewards may change over time. In my experience, I have not had to change my votes over the several months I have been staking. But I do keep it in mind. DPoS staking and blockchain rewards are still new and experimental.

*Any dividends obtained through staking may be subject to income or capital gains tax. Be sure to get with your local taxation office to obtain your regional requirements.