In this post, we take an in-depth look at the NEO passive income feature. We’ll also show you how to navigate NEO’s Chinese-based blockchain protocol, which pays you in a cryptocurrency called GAS, just for holding the NEO coin in a digital wallet. But first, a quote on the power of passive income streams.

“How many millionaires do you know who have become wealthy by investing in savings accounts?”

That’s a quote from Robert G. Allen, author of five New York Times bestsellers on wealth creation. Experts like Mr. Allen know that to have wealth, passive income is a must. That’s why the focus of this series is creating passive income with cryptocurrencies.

NEO is a blockchain protocol that launched out of China in 2016, with “Ant Shares” as its original name. Dubbed China’s Ethereum Killer in the early days, it re-branded to NEO in 2017, with a new look and updated vision.

Fundamentally a blockchain protocol layer, NEO lets developers build decentralised applications on top of its blockchain. Users like me and you, or even other businesses, can then use these applications for things like gaming, authentication services, IoT devices, or for logistics.

These applications differ from centralised applications because they utilise smart contracts. With NEO, the name for these is NEOContracts. In this way, developers program back-end business logic to be immutable, transparent, and decentralised. 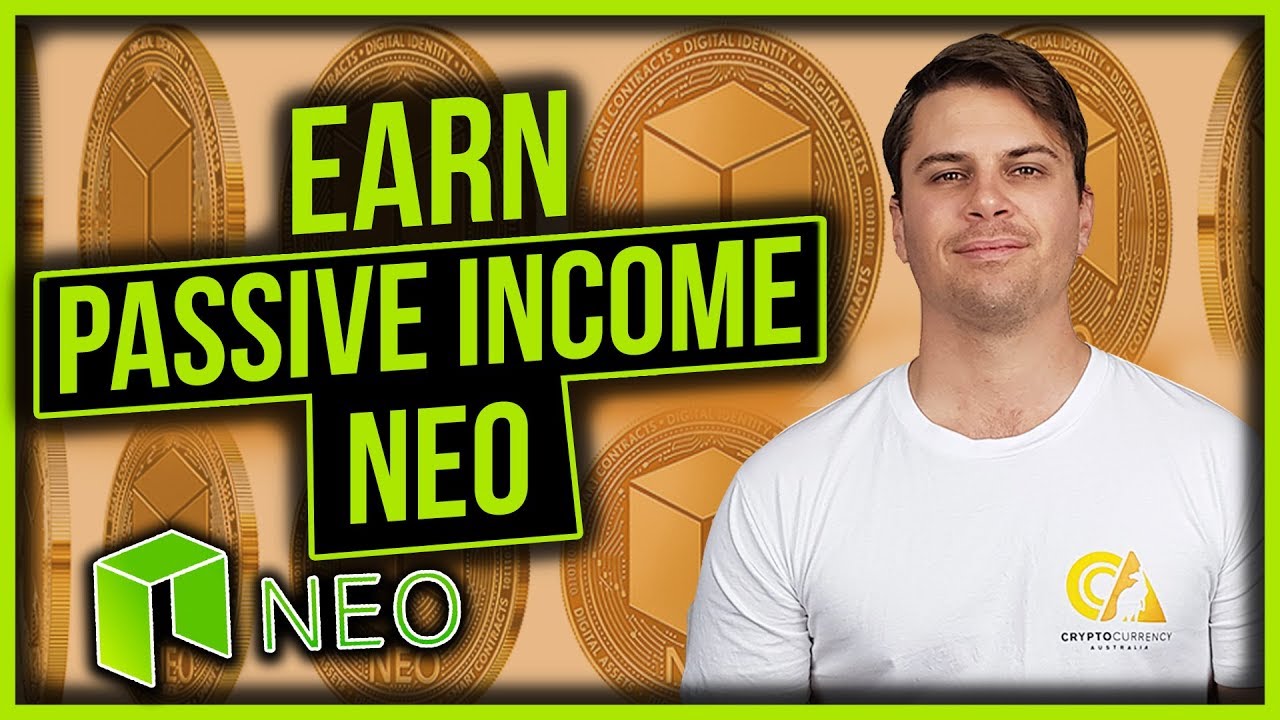 How NEO Differs from other Blockchain Protocols

Many different blockchain protocols exist today for building decentralised applications. Just to name a few, we have Ethereum, EOS, Lisk, Cardano, VeChain, Ontology, ICON, and many more. Each has their own nuances and NEO focuses primarily on:

What’s the Difference Between NEO and GAS Tokens?

In the NEO passive income staking system, the NEO coin is called a ‘smart share’ and is an indivisible token. This means it cannot be divided up into small chunks. Only one NEO coin can be held and transferred at a time. The NEO token use-case represents a certain right to manage the network. These rights include:

The second token,  which is called GAS, is the fuel for the network and is limited to 100 million tokens. The NEO network consumes GAS to operate, execute smart contracts, and to store tokens. Unlike the NEO coin, GAS is divisible up to 8 decimal places.

NEO has designed its architecture in such a way that GAS is generated and rewarded to holders of the NEO coin. Its generation has a schedule designed through a decay algorithm over 22 years. Essentially the creation of GAS is programmed to slow over time and stop in about 22 years from now, when it reaches 100 million.

Right now, approximately 8 GAS are produced per confirmed block. These 8 GAS are distributed to holders of NEO, proportional to how much they hold. Each block is confirmed approximately every 15-20 seconds. The GAS reward will reduce by 1 GAS per block, per year. In summary, regarding earning NEO passive income, GAS is reduced over time in this way:

NEO & GAS on Markets –  Getting Started with NEO Passive Income

Both the NEO and the GAS tokens are traded on exchanges. So when getting ready to earn NEO passive income they are easy to acquire. Their prices will fluctuate according to supply and demand. Procuring NEO to earn GAS to get going with earning NEO passive income can be cheaper or more expensive, depending on the market rate at the time.

Because earning GAS is proportional to the quantity of NEO you hold and not to the USD amount you purchased, buying NEO right now would mean it is 91% cheaper to earn the dividend. However, the dividend would have 95% less value than what it had back in December 2017.

How Much NEO Passive Income Can You Earn?

Now for the most important part of this topic! How much can you actually earn?

It all depends on how much NEO coins you hold, and how much you spent to get them. Head on over to neotogas.com and you can calculate how much GAS you will get based on your NEO holdings. You will be provided with a theory and an actual calculation. We will use the actual calculation here:

For holdings of 100 NEO coins, this will produce approximately 9.59 GAS per year. 100 NEO based on the current market rate at the time of writing would cost approximately $1,665 USD. The 9.59 GAS generated would be worth approximately $44.7. This is an annual return of around 2.7%, which is very low. This then brings into question;

Is Investing to Earn NEO Passive Income Really Worth it?

At the current market rate of GAS, arguably no. However, when GAS reached its peak of $77 USD in January 2018, the GAS produced from our 100 NEO coins would have been worth $738. A healthy return for the year of 44%, all generated passively. This does not take into account the fact that the NEO coins may have appreciated alongside the GAS coin appreciation.

The incentive for buying and holding NEO is the future potential. You are investing in a network and a new economy, with the hope that it will continue to gain traction over time and the network will be used more and more.

Investors have the incentive to buy NEO while its cheap, and while the network is still in early development. Holders of NEO are highly incentivized to retain ownership of the NEO coin, so as to receive the GAS generated.

The GAS is also limited to just 100 million, no more, no less. Its supply on the market slows down over time. With increased network demand for GAS and a lowering supply, an appreciation of the token price may occur due to coin scarcity.

So How Do You Earn GAS?

Now that we’ve explained the relationship of NEO to GAS, let’s talk about how to earn some NEO passive income. Surprisingly, it’s rather simple. The first thing to do is buy some NEO coin on an exchange. This might be Binance or CoinSpot here in Australia, both of which you can review on our exchange tutorial.

From here, there are two options:

Use a hardware wallet such as Ledger and transfer your NEO coin to the wallet created on the device. We recommend this cold storage option as it’s the safest and most user-friendly way to keep your private keys safe.

Use a desktop software wallet that processes the GAS for you. There are several that can be found on the official NEO website, all of which have different functions and user interfaces. We recommend downloading the Neon Wallet, as it’s user-friendly, lets users control their private keys, and syncs with Ledger devices.

Both of these options will still require downloading the Neon software wallet in order to process the GAS. Your GAS is earned automatically, but you need to follow a process to ‘retrieve it’. We cover that topic a little later in this article.

It’s worth noting that some exchanges, particularly CoinSpot and Binance, actually process the GAS for you. Meaning once you purchase the NEO coin and leave it on your exchange wallet, both Binance and CoinSpot will automatically deposit the GAS for you periodically.

If you are using a Ledger hardware wallet, which we recommend, you will first need to send your NEO coins to the Ledger wallet you created.

Check out our detailed Ledger tutorial to get a good understanding for setting up a Ledger Nano S, keeping in mind this tutorial is for Bitcoin, Ethereum and ERC20 tokens, but the same principles apply for NEO.

You will have to download and install the NEO app to your ledger device via the Ledger manager.

Next, download and install the Neon wallet. After you do this, open it up and select the option to login using a Ledger. Take care to make sure that your device is connected, unlocked, and you’ve opened the NEO application on your Ledger device.

You should then see an address associated with your account. This is where you will send the NEO tokens you purchased on an exchange.

Once you’ve done this, wait until some GAS is generated. Depending on how much you bought, this could be a few days up to a few weeks.

After some GAS has been generated, it will appear automatically in the Neon wallet. You simply press the Claim GAS button, following the prompts on the screen and on your Ledger device, making sure you ‘sign’ the transaction by pressing both buttons simultaneously.

The GAS will then be deposited into your wallet after its confirmed on the blockchain, which could be a short while.

Much like the above, you will first need to download and install the Neon wallet in order to get going with earning NEO passive income. Once installed, open the application and click, “Create a new wallet”.

You will need to choose a passphrase to encrypt the private key. Record this and store it somewhere very safe. If you lose it, you will lose access to your funds forever. Also, ensure it is a long and complicated passphrase so no one can guess it.

Additionally, you may save the encrypted key which is stored in the Neon wallet application files. Do this by simply pressing the save button.

Once you have backed up the keys, you can go to the home screen. Then, choose the option for logging in with an encrypted key or using a saved wallet, depending on what you did earlier. You can then input the encrypted key and the passphrase that you set.

After completing all this, you are now logged into your wallet, which is connected to the NEO blockchain. To start earning GAS, it is as simple as sending the NEO you bought on an exchange to the NEO public address for your wallet. You are now ready to being earning NEO passive income!

If you want to save private keys in a text file for convenience, consider purchasing a thumbnail drive that provides encryption. Thumb drives from SanDisk provide full encryption so you can password protect files stored on it. It also lets you store files offline, so you can store it somewhere secure and also have it password protected.

What are the Risks involved?

As with any investment, there is risks. In fact, the risks with staking and earning NEO passive income is very high, and should be well understood. Here is a few of some of the key risks you need to be aware of if you are considering staking NEO.