Next in our passive income with cryptocurrency series is PIVX, a cryptocurrency designed to preserve individual privacy and security, while enabling its holders to earn PIVX passive income both as a staker, and as a Masternode. We’ll show you in detail everything you need to know to get started earning some nice residual income investing with this unique cryptocurrency. But first, a quote on passive income!

“The key to financial freedom and great wealth is a person’s ability or skill to convert earned income into passive income.”

This quote from Robert Kiyosaki, author of Rich Dad Poor Dad, amply describes the reason we created this passive income with crypto series – to teach people how to develop passive income ideas so they can create their own financial freedom. So next up, how to start earning some PIVX passive income!

Launched in January 2016, PIVX has many characteristics that set it apart from other privacy coins. The acronym, PIVX, stands for “Private Instant Verified Transaction” The name says much about the way PIVX works.

PIVX created their own Zerocoin-based protocol called zPIV, with the PIVX coin being used as the medium of exchange and store of value.

By using the full Zerocoin protocol ideologies, PIVX enables fully private and fungible transactions. This is done by converting publicly verifiable PIVX coins to zPIV using something called ‘Zero Knowledge Proofs’. The zPIV is converted back to PIVX through a normal transaction process. 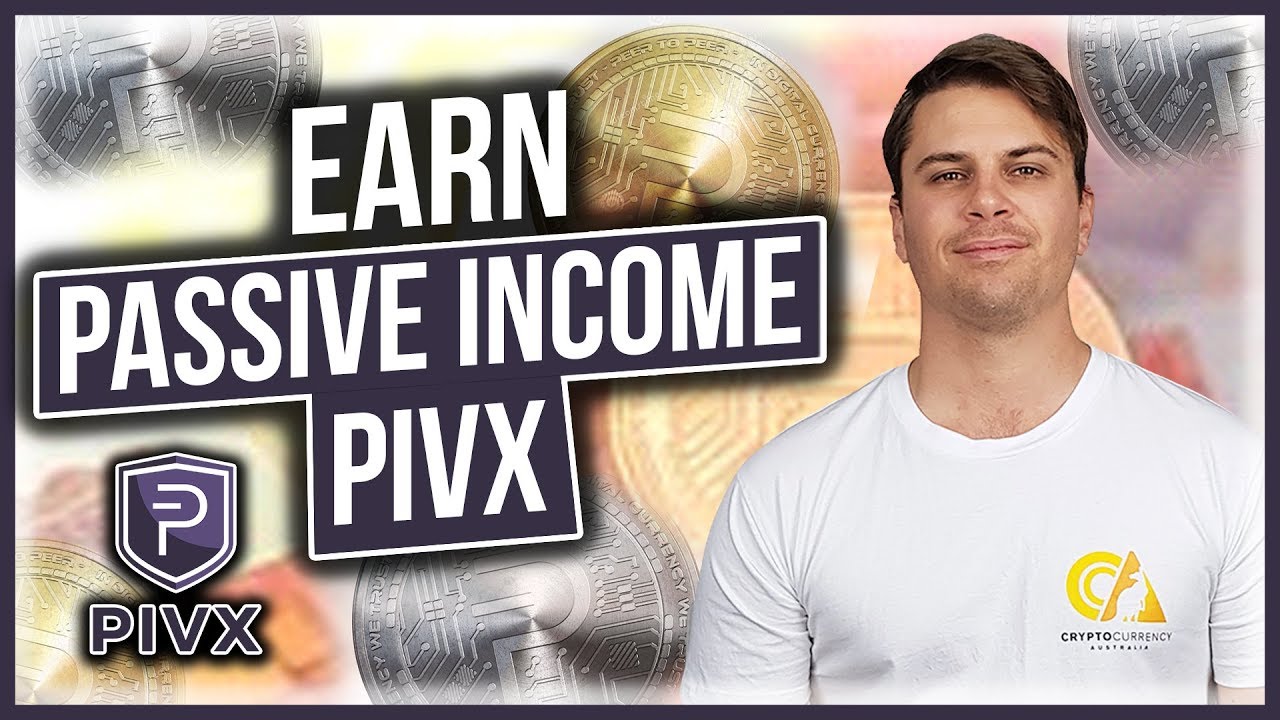 PIVX is designed with a focus on fast transaction speeds, security, and decentralised governance. Using a Proof-of-Stake (PoS) consensus algorithm, users can earn rewards as a Masternode or as a staker.

How Does PIVX Differ from Other Blockchain Protocols?

Many blockchain protocols are a fork of another protocol. As such, they don’t exhibit a whole lot of differences in their source code. PIVX is a fork of the Bitcoin Core protocol, but has undergone significant changes to its architecture. A major example is that it uses a Proof-of-Stake consensus algorithm instead of Bitcoin’s Proof-of-Work (PoW).

Another unique feature of the PIVX protocol is the ‘See-Saw‘ reward balance system, which dynamically changes the reward payout to Masternodes and stakers. This See-Saw mechanism, however, has been phased out, with a new system being voted in called ‘zPOS‘, which increased the zPIV staking reward by up to 50%.

The See-Saw algorithm will be replaced with the new reward system, along with the release and activation of zPoS.

You can read more about it in their Telegram channel or in the original tweet on March 14, 2018

Ultimately, the PIVX protocol and coin offers users and holders the following features;

Getting to Know the PIV Coin

The coin associated with the PIVX protocol is also aptly named PIVX and has been tradeable on a variety of markets since around mid-February, 2016. This makes it an Original Gangster in the crypto ecosystem. The coin is also currently in the top 100 by market cap, making it valued around 95% higher than all other coins right now.

Unlike other passive income generating coins like NEO, PIVX opted for a single token model. Essentially, this keeps the overall design and architecture simple for all stakeholders interacting with the system.

The coin’s primary use-case for the end user revolves around one main purpose, which is as a decentralised currency. Its value is favourable to those wanting a well established, fast, cheap, and privacy-focused cryptocurrency.

PIVX uses a combination of Masternodes and Staking for helping to secure the network and for governance. Thus, as a holder of PIVX coins, there are two options for earning passive income in the form of PIVX coin dividends.

To set up a Masternode, the minimum requirement is 10,000 PIV coins. At the time of writing, the market rate for 10,000 PIV coins is about $10,500 USD. These 10,000 coins are very much like collateral, or a pledge, and signify a commitment to the network. Additionally, running a Masternode requires a VPS server to be run on a computer 24/7. As such, to set up a Masternode, you’ll need to have a decent level of technical know-how and computer skills.

Check out the official PIVX guide for establishing a Masternode

The second way to earn PIVX passive income is to stake your coins. This requires users to store any amount of PIV coins in a special PIVX wallet. These coins are then ‘staked’ on the network, and users receive more PIV coins passively as a dividend. Unlike other wallets such as NEO or Lisk, the PIVX wallet is required to stay open at all times to receive the reward.

Although earning PIV is passive, users must keep their wallet open and computer on to be eligible to earn rewards. There is also a small computational contribution that must take place before earning any reward. This computational component keeps the computer operating on standby. This way, there is only a minor cost for earning PIV rewards as a staker.

The reward in USD value can fluctuate depending on its secondary market value. If PIV coins were bought at a low price and then rose significantly in value, the return-on-investment would not rise proportionally. The same can be said if the coins were bought at a high rate and then dropped in value. The rewards for the initial investment are again, not proportional, given the highly volatile nature of a coin’s price on markets.

Long-term value appreciation of the PIV coin, and adoption and use of the currency as a legitimate medium of exchange, is what anyone looking to set up a Masternode or stake PIVX coins should be focused on.

How Much PIVX Passive Income Can I Earn?

This depends on whether you are running a Masternode or you’re just staking. Because Masternodes require a large upfront collateral and dedicated software and hardware to set up, so they receive a higher reward payout.

If you want to check out how much PIVX Passive income you can earn based on a certain amount of coins, check out the rewards calculator.

The rewards for Masternodes equal about 53.92 PIV coins per month with a minimum of 10,000 PIV in collateral. This works out to be around 647 PIV coins per year. The ROI for one year is around 6.47% assuming the coin value does not increase or decrease after purchasing the 10,000 PIV coins.

The rewards for staking are around 3.79 PIV coins per month, for a minimum of 1000 PIV as collateral, which at today’s market rate would cost around $1,050 USD. This works out to be around 45 PIVX coins per year, with an annual return of around 4.5%, again assuming the coin does not rise or fall in value after the initial purchase.

Is the PIVX Passive Income Worth it Long Term?

PIVX designed the system so holders have incentivisation to keep the token locked up in wallets and Masternodes. In fact, we can verify that around 60% of all PIV coins are currently being staked on the network.

Why does staking matter?

Because prices are heavily influenced by simple supply and demand economics. Proof-of-Stake consensus mechanisms inherently incentivise holders who receive block rewards to keep hodling. If coins appreciate while receiving rewards, many multiples of returns are possible. The upside for staking coins is arguably much greater than the downside.

PIVX has a programmed and projected supply schedule. After each block confirmation, which happens every 60 seconds, the minting of 6 PIV coins takes place. Over time, the programming will slow this down, as all the transaction fees that occur on the network, including zPIV minting fees, are burnt. This means they come out of circulation forever.

As PIVX becomes more of a currency, and when it reaches 10-fee transactions per second, the programming inherently causes a deflationary progression. In simple terms, its design is such that the system burns more coins in transaction fees than the amount of minted coins.

Now that you know all the basics, how do you begin earning some PIVX passive income? Let’s start with a Masternode first.

To earn coins through a Masternode, you’ll first need to ensure you own 10,000 PIV coins. You can buy them from an exchange such as Binance, where you can buy with Ether or Bitcoin. Here in Australia, you can buy directly with Australian dollars from exchanges like CoinSpot.

Check out our exchange guide to learn more about buying from exchanges.

You’ll then need two computers, one for installing a control wallet (to store your 10,000 coins), and a second for running a Masternode server 24/7. This will be a virtual private server (VPS) and allows the computer with the control wallet to have a turn off option. Earning coins still occur when the computer is off.

Once you have these things in place, follow the detailed PIVX setup instructions to start earning PIVX passive income as a Masternode.

To earn coins through staking, one would first need to buy some PIVX coins. With staking, there is no minimum amount. You can stake with as little as 5 coins if you want to.

You’ll first need to download and install the official desktop PIVX wallet. Wallets are available for Apple, PC, and Linux.

Once you have installed the wallet, you should encrypt it, then back it up. Start by opening up the wallet, then go to Settings -> Encrypt wallet. Put in a password that is complex and only you can remember.

After encrypting the wallet, lets back it up. This method of backing with the PIVX wallet saves your private key in a file called a .dat file. You’ll need to store this somewhere very safe, preferably offline on an encrypted thumb drive. Drives from Sandisk go for around $40.

Using the copied address, send your PIVX coins to this address from your exchange wallet. You might have to wait a little while for the coin transfer to complete. The wallet will also sync to the PIVX blockchain, which takes 101 confirmations. This could take some time depending on your internet speed. You can check it in the lower left portion of the wallet.

Once the wallet finishings the syncing process and the coins have arrived, you will need to unlock the wallet to start staking. To do this, click Settings -> Unlock Wallet -> Enter Password & click ‘anonymization and staking-only option’ -> Click OK.

After you see green in the bottom right, you are now successfully staking!

Any investment involving cryptocurrencies should be considered high risk. The risks of staking and earning PIVX passive income are significant, so we urge users to research and conduct due diligence before attempting this. Here are a few of the key risks to be aware of when considering staking PIVX.